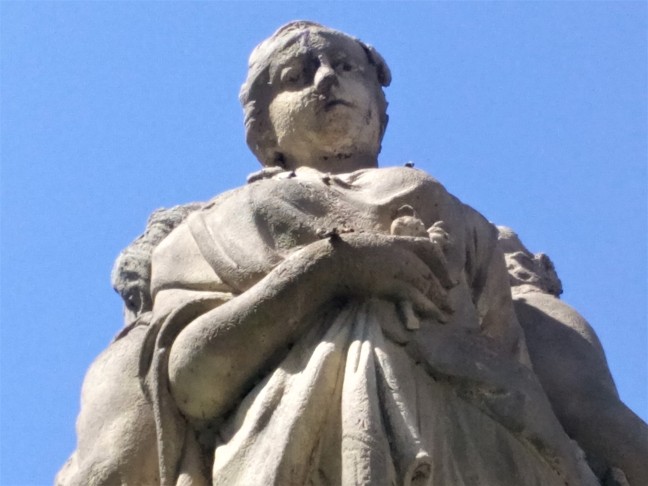 The number of Graces varied in different legends, but usually there were three: Aglaia (Brightness), Euphrosyne (Joyfulness), and Thalia (Bloom). They are said to be daughters of Zeus and Hera (or Eurynome, daughter of Oceanus) or of Helios and Aegle, a daughter of Zeus.

To try and work out which particular Grace this is and whether she is, in fact, holding a kitten, (I mean, she is, I’m simply being polite). I’ve had a look at a few other pictures and statues. It’s actually pretty rare for them to wear clothes, although they often have a bit of draped material.

Here’s what the Louvre museum thinks:

Eternally young and lovely, they represented charm, beauty, and human creativity, and were depicted naked, originally holding attributes such as apples, roses, and sprigs of myrtle.

From other statues they only seem interested in draping over each other and gazing into each other eyes – which is all very romantic, but not very productive for people who represent creativity. However, the Grace in my picture has defied all their expectations: she’s got dressed, clearly has bigger and more tragic things on her mind than looking pretty and she’s holding a kitten. I think this statue must represent the three Graces once they’ve grown out their frolicking about naked stage. These days Aglaia (Brightness) works in a food bank and plays the drums, Euphrosyne (Joyfulness) volunteers at Samaritans and does chainsaw sculptures, and Thalia (Bloom) is, of course, a gardener who takes in homeless kittens. Which answers all my questions.