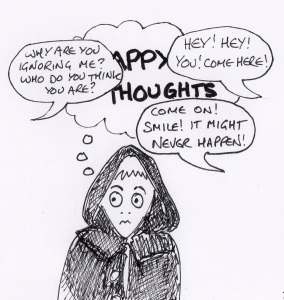 This is a huge lie: “You’ll miss getting hassled in the street when it stops happening.”

When I was younger (teens, twenties and thirties), I frequently got harassed in the street. It was probably because I walked a lot on my own – I did this because it was, and still is, one of my favourite things to do, a time when my imagination can let loose and fly. Harassment would vary from shouts, to being chased by cars, to being followed on foot; from a friendly chat that would slowly, inevitably become aggressive to being grabbed. It felt relentless and meant that I always kept my head down and tried not to look anyone in the eye. On a couple of occasions when I accidentally looked up and caught the eye of a passing stranger, they turned around and started following me so that I had to hide in shops to avoid them.

I’m not particularly good looking and I’ve never dressed in a sexy manner, I was just a young woman on her own, walking around. And I hated it. Not only because it was scary and dangerous at times, but also because it interrupted my flow of thoughts with something tedious and banal. However, when I complained, what many men and women told me was:

“You’ll miss it when you’re older and it stops. Then you won’t feel attractive any more, you’ll feel invisible.”

And since I’ve noticed this is a common message in our society, I would like to point out,

It’s absolute bollocks. Not being harassed is fucking great.

Firstly, I haven’t become invisible. People, more often men, still make eye contact, but instead of this leading to trouble, it leads to something mellow and friendly – maybe a smile, maybe a hello. It’s lovely, and because I don’t have to worry about it suddenly turning nasty (which almost always used to happen, and never happens now), I can feel safe making that eye contact. I don’t feel invisible, I feel like a normal member of the human race amongst other normal members, instead of feeling like a frightened mouse with a flashing light on my head drawing in trouble.

Secondly, I know we are taught that how you look is incredibly important if you’re a woman, but people ‘being attracted’ to you is a pain in the arse a lot of the time (I put ‘being attracted’ in quotes, because I’m not sure that’s really true, it’s more that you’re present and female). Useful if you want someone to fancy you, sure, but when I’m walking around with my head in a daydream, I don’t want anyone to fancy me. I’m busy.

And finally, I didn’t feel attractive back then. I think having constant comments on my looks made me too aware of them. Even if all you hear are compliments, it makes you aware of your flaws, tense about the prospect of not being attractive, so the result is you feel unhappy with your appearance. Now that strangers are polite and disinterested enough not to interrupt me to tell me how I look, I just don’t think about it that often, I can keep my thoughts to things I actually care about, such as rambling on like this.

TLDR: I’m aware that most men don’t harass women, but it is surprising the number of men and women who still think it’s not a big deal, not worth complaining about. When women do speak out (which they’ve been doing a lot recently) others get quite annoyed with them, “It’s only a compliment!” they say. My point is, I don’t think street harassment is just annoying and occasionally harmful, I think it buggers up how all people connect to each other, it makes both men and women angry with each other. Not getting hassled means that women can have calm, friendly connections to others, and it takes some unnecessary tension out of life. Which seems like a definite good thing.

Anyone else feel the same? Anyone think I’m talking nonsense? If so, why? All comments welcome, I love a chat.