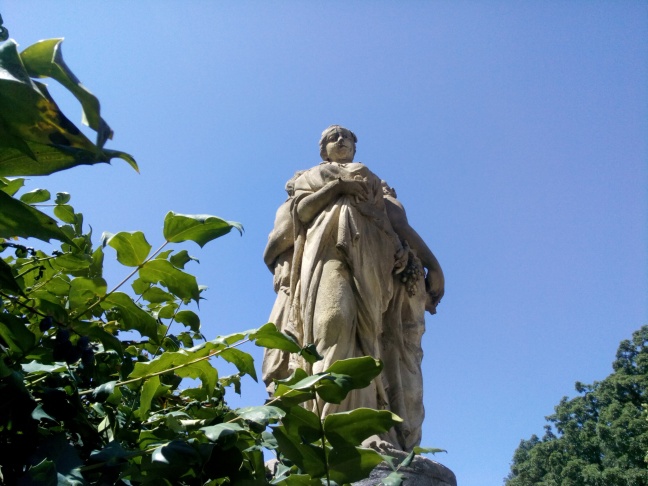 Today was one of those days when I wonder if I’m out to get me.

First I dreamed about a fight. I’m not sure why I was having it, but definitely it was something heroic and Matrix-like in its cool. There were (probably) spinning kicks and majestic dodges against my huge male foe who was almost certainly evil. And then I punched him, and woke just as my fist hit the wall next to my bed. It hurt, but apparently even majestic fights are quite puny when they leave the dream world, so no damage. A definite sense of Oh you fucking idiot, though.

Then I went to work, and I had to cut back some large Euphorbia. Euphorbia can be nasty because it has poisonous sap that oozes out all over you when you cut it, but I’m lucky and don’t react to it, it’s just sticky and annoying.  What I was more bothered about was the insects living in the bed that didn’t like my invasion of their space. They started biting me, not unreasonably. But I noticed that they bit less the more sap I got on me. Aha! I thought. Nature’s insect repellent. Because of course that is why Euphorbia has toxic sap – to keep away biting insects. So I smeared some on my arms and legs and the insects left me alone. I felt so clever.

Then in the afternoon I got quite dusty and wiped my arm over my face, then carried on chopping – Mahonia this time. My eye started to sting, but I assumed it was the dust and blinked it away. But the pain wouldn’t go and was getting quite nasty. I staggered out of the bed and poured some water on my eye. A friendly builder working nearby asked I was ok. ‘I think so, I just got something in my eye,’ I said. ‘It’s not Euphorbia sap is it? Because that’s really dangerous if you get it in your eyes.’

And I realised that of course it fucking was, so I went back to base and spent the next ten minutes trying to wash the toxic sap out of my damn eye. And for anyone following this blog, yes it was the same eye that landed me in Urgent Care a few weeks ago.

That afternoon I was working in the same bed, trying to not be a self-sabotaging fool, and I looked up and saw this face looking down at me from a nearby statue. Pitying, exasperated, unimpressed, I have a feeling this statue has seen many idiots before.

But more importantly, is she holding a kitten?

My boss asked me to clear out a corner of the garden under some shrubs. Hidden away behind a wall, under a load of Fatsia leaves, I found this penguin. He was about knee height.

I asked my boss and she said that he was out in front of someone’s house a few years ago and she hid him. Apparently penguins are not appropriate for our gardens. I think he’s great, I shall be saying hello next time I’m there. 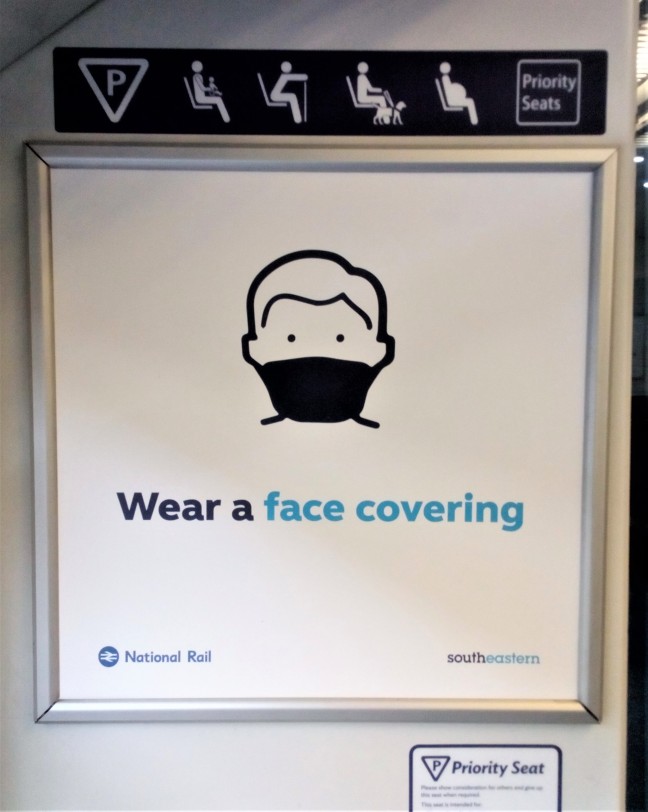 So I wrote this book Supernice about an alien invasion. The aliens create a dystopia of oppressive new rules and terrible consequences for breaking them. In response, the government replace advertising hoardings with posters that politely (and then not so politely) tell the public how to behave to avoid trouble. Following are some quotes from the book. (And the book can be acquired for a dollar, to your right, if you fancy)

At first the messages seemed friendly:

Advertising hoardings stretched along the seafront. Usually they were filled with adverts for phones or cars, but now the adverts were in pastel shades of purple and pink, with butterflies and smiling faces. In large letters the messages were simple:

PSST, YOU’RE BEAUTIFUL, PASS IT ON

But even then, Natasha was suspicious and happy to see signs of rebellion:

As she headed back home, Natasha passed a hundred more pink posters in bus stops and stuck to lampposts. Some had already been defaced.

KINDNESS SPREADS was graffitied with DESTROY!

And LOVE UNITES US in purple, with FUK DA ALIENS in angular black writing over the top. Natasha had never liked graffiti – she always thought it made a place look messy – but this was righteous.

And finally as the oppression became more extreme and the pretense ended:

The main road had changed again. Instead of advertising hoardings with hippy messages, now there were screens, each showing an order.

POLITENESS IS NECESSITY and SHOW RESPECT and DON’T BECOME ONE OF THE TAKEN.

I wanted to create an atmosphere of tension and uncertainty, but one in which people needed to find a way to not only survive, but to still laugh, still connect, still keep going. And of course they wanted to dupe the aliens and escape too.

Well now I’m back at work, I’ve discovered that is exactly what London has become. Lots of instructions with cute pictures, saying Cover your face, Keep your distance, Don’t travel unless you have to. It’s all considerate messages for our own safety, but the atmosphere is still intense. With half our faces covered, people are more suspicious of each other, and anyone could be a virus carrier. But we still need to laugh, connect and keep going. Luckily we don’t need to worry about the alien bit. Yet. 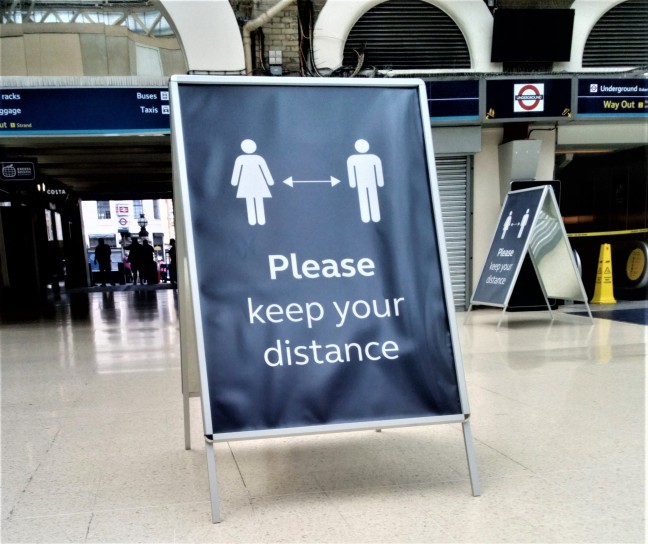 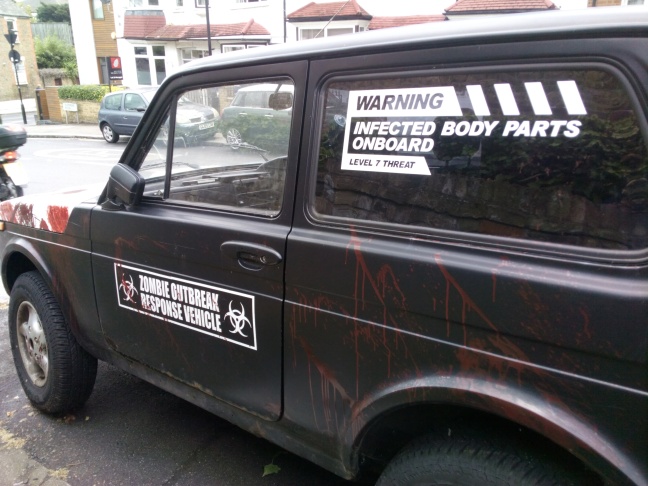 So, I’m back at work and it’s great to see everyone again and be outside tackling some plants.

It’s all quite odd though, everything is not quite the same, little details have shifted. I’ll get some pictures tomorrow. It’s as if someone gave all of London a makeover. And then almost all Londoners have changed too. We hide our faces. We aren’t rushing, instead we keep our distance. No more stand on the right, walk on the left on escalators, now everybody stands. And there are police everywhere.

At work, my colleagues are just like they always were – cheery, lovable oddballs. But with longer hair. The guys have either slicked back styles or new wavy locks.

I feel like this is a puny blog, so here is a fella I read about this morning, the monkey slug caterpillar, Phobetron. They aren’t anything to do with monkeys or slugs, but they are caterpillars. Aren’t they incredible?

I haven’t written for a few days. With everything going on in the US with BLM protests and then protests in UK, it feels rude to chatter about 3-legged cats.

I’m not gone though. And I hope that any of you bloggers in the US, (I know Darnell Cureton, Boo and Shameful Narcissist are, so I hope they’re all ok) are safe. And I really hope that all this leads to change. The UK definitely has it’s problems with institutional racism in our police force, but the violence is so much less and there is usually some accountability. I’m a long way away and only get to see videos and pictures, but the shameless misuse of power by cops in the US looks terrifying.

Also, I got a call from my boss today. I’m back to work in a week and a half. I can’t pretend I’ve hated being off, laziness and isolation suit me fine, but I can’t wait to see my colleagues and to be outside with the plants all day. And it means I can stop doing proper exercises, like aerobics and all that bastardry. I’ve learned to tolerate it, but I would always rather be digging up something than leaping around to a perky presenter.

Stay safe everyone, love to all of you.

Unsinew  –  to take strength from

My book is out there! And it’s free on Smashwords! Supercheap on Amazon! For any of you I sent a copy to who liked it, do you know anyone else who’d enjoy it? Please spread the word and I’ll be forever thankful. I’m not looking to make money, I just really like it when people read my stories.

Smashwords, where the book is for free:

This is the universal Amazon link for wherever you are: mybook.to/Supernice

And this is the UK Amazon link (80p): https://amazon.co.uk/Supernice-Smile-else-Petra-Jacob-ebook/dp/B089G6RZD8/