There are many inspirational quotes and posters online, but for me they never quite cover the actual situations I find myself in. So I’ve been putting together some motivational posters for the inept and somewhat cynical. This is first, hopefully it will make sense to someone other than me… 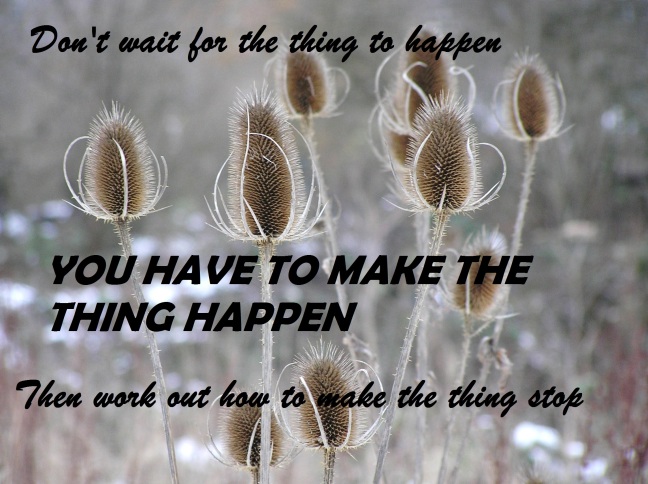 The prime minister, commonly known as Ethelred the Inept, was fiddling with his calendar. The date showed 15.02.2301, which was correct, but he wanted it shown as a series of pictures; he hoped that would cheer him up on what was turning out to be another crappy Thursday.

He had been chosen to run the country as damage limitation. A global financial crisis had been arranged to properly distribute more money to the very rich and as always, the result was a grumbling and dissatisfied public. In order to provide distraction and a clear focus for anger that would lead away from the actual cause of it, a buffoon had been promoted well beyond his abilities to head the country. And besides, no one intelligent wanted to do it. Ethelred’s job was to be incompetent in a flamboyant and headline grabbing manner, something he had achieved with aplomb. However now the situation had spiralled out of control, hatred towards Ethelred had resulted in strikes and explosions, so urgent meetings had been held among his advisers to come up with an alternative plan. Ethelred was not invited to these meetings, he didn’t know of their existence and only got to hear the final decision.

While Ethelred fumbled with the wavy finger technology on his calendar, a civil servant called Jim attempted to explain the situation.

“But why do they hate me? He said, plaintively.

“Well, in part it was losing Big Ben to a Russian diplomat in a dare, sir.”

“And the pig brothel,” continued Jim.

“Not the dead one, sir.” Ethelred started to play with his calendar again, he found it boring when people criticised him.

“Oh yes, that was brilliant, all those idiots!” said Ethelred, perking up again.

“And useful, sir. People would pour all of their energy into hating the powerless and completely ignore what important people were up to.”

“Why did they ever get rid of it?”

“They simply ran out of people desperate enough to be on it. It was inevitable really.”

“So presumably you have a plan to get round that?” said Ethelred, checking his reflection in the back of a spoon.

“We’re going to use DNA from some of the most famous murderers of the last century. Proper serial psychopaths. We’re going to clone them and put them in a house together.”

“The usual tasks, silly costumes, electric shocks, bargaining, and of course the public will vote to throw them out.”

“Wait, you can’t just release murderers to the outside world.”

“Oh no, anyone voted out will be executed, of course.”

“Will be released to the outside world.”

“Wait, but you just said…But the people won’t stand for it will they?”

“On the contrary, the public will love it. They love an evil rogue turned good. He’ll be welcomed into the community. His lovable quirks, cheeky grin and refreshing honesty. We saw it time and again with hated celebrities. Truly awful people would go on Big Brother, and act slightly less awful than people were expecting and everyone would love them. Think how dramatic the turn-around would be with Jack the Ripper or Sweeny Todd.”

“It’s a brilliant plan, let’s do it!” said Ethelred clapping his hands, completely oblivious to the fact that the decision had already been made.

The ram’s bloated belly as it curled around the moon

A Rorschach hellmouth with a mirrored demon at the gates

A hedgehog-rabbit hybrid in a plush fur coat

These things I see in clouds

This is my third and final quote. It’s more important to me for its meaning rather than where it comes from (no critcism of the Narnia books though).

It reminds me that you should strive to act like a good person, no matter how much the people and situation around you are not good. It’s frustrating when I see others acting cruelly or selfishly and justifying it by saying, ‘that’s just the way things are’, and even worse when I find myself doing it. We all help to make our society and by acting as if being kind and rational are defaults we are helping to create a society where they actually are.

When I remember this and start acting the way I would like everyone to act, then people respond to me with kindness, and I realise that I’ve been part of the problem.

And in case that is a little too serious, here is a quote from Catch 22…

“Yossarian was flabbergasted. His leg went abruptly to sleep.”

Second day and this is the quote

“When the brain blazes like a bonfire, we no longer need to ask why we are alive.”

From The Occult by Colin Wilson.

The Occult is a book I read many moons ago and enjoyed, but don’t remember now so well. However, that quote leapt out to me at the time and I wrote it down and kept it, because it is for me so totally true. When I get bored in life, I start to feel a bit lost and pointless; not unhappy, just feeling that maybe being here on this planet is a mistake. Then something stirs me awake (usually when ideas for a story start jumping around, but it can be spending time with good people or studying or discovering some bizarre truth about the world too) and all doubts vanish as my brain blazes. It’s like pure energy bouncing back and forth, sparking up neurons and connecting ideas. At the moment I’m going through a sluggish phase, and I need that quote as a reminder, I hope it means something to someone reading too.

So I’ve been nominated for a quote challenge by Making Sense of Complications, who has an interesting blog of scolarly ideas and curious words.

For this challenge I need to

1. Thank the person who nominated you

“When you throw everything up in the air anything becomes possible.”
―  Salman Rushdie, The Satanic Verses

Always good to give some attention to bloggers I like, but I wonder: where will it end? If each blogger nominates three more, won’t it spread like a virulent disease? First one, then four, then thirteen, then my ability to do maths runs out. Eventually we’ll exhaust new nominees and we’ll be stuck renominating and quoting each other for all eternity. Still, I guess it will keep us out of mischief. Anyway, I nominate the following, it was tricky, because there are many to great bloggers to choose from, but these three have either threatened to stop blogging or cut down and so I’m hoping to lure them out to open ground, because they are all great.

Howl, howl, howl at the lightbulb!

Stir the cobwebs so they waft and settle

And slip in a toothpick

Rage, rage at the cutlery!

Voice squeezed through your teeth

In a raggedy whisper

Cry at all of nothing

Huddled between your knees

Keep below the window