Word of the day: odology  –  science of the hypothetical mystical force of od (not heard of this before and there doesn’t seem to be much information online. Anybody know about it?)

I haven’t written for a really long time now (it may only be weeks) and I’ve not been sure why. Every time I’ve picked up my still-broken laptop, held together with tape and a rubber band, my mind has been a void. Until now, I put this down to general apathy. Stuff has happened, my life has been fine, but I couldn’t think of a single reason why anyone else would want to read about it.

Then today it came to me, someone must be out to stop me and has put a block on me communicating with you, a spell. There have been clues: odd looks in the street, strange dreams, and I shut my finger in the gate which made the nail turn purple. I’ve seen people in my town (by which I mean the bit of London I live in) handing out cards offering to put spells on people for a reasonable fee, so the means are there.

Not sure about motive though. Was I in danger of stumbling on a truth? Did my seemingly innocuous posts about mowing troubles and landlady drama leave clues to a deeper conspiracy? I agree it’s unlikely, but so many things that happen are unlikely, so let’s not dismiss anything yet.

Anyway, for now the spell appears to have lifted and I’m back.

Other events: Mike has been making demands that we find money for the drinks fund (we use it when we go out drinking together). Since we work around rich people, they often drop tenners in the shrubs without noticing. Until today all I’d found was an out of date fiver, but this morning I was able to present Mike with a crisp twenty rupee note. He didn’t seem pleased.

And management have proudly told us that in a few weeks we will be saying goodbye to the rats and grime and moving into a new messroom [Hooray!] with them in the same building [Shit]. I don’t dislike our management as individuals, but as a group they like to sit around in silence being clean, speaking only when they need to bitch at each other. Gardeners aren’t really like that and I can see there being a clash. Still, we’ll see.

Anyway, sorry for neglecting you all, I’m looking forward to catching up on your blogs…

Nothing’s happened for me to write about today, things are calm and quiet, but I have had one thought on what it takes to be happy:

I don’t believe there’s a universal secret to happiness, we’re too varied, one person’s blissful life is another’s miserable cage. So there is no rule book or map to follow, you just have to use trial and error to work out what’s right for you. Experiment, explore, ask questions. And then, when you’ve found the life that gives you peace and meaning, you have to develop the strength of mind to ignore all the people telling you you’re wrong about it.

Hopefully tomorrow there’ll be the usual ridiculousness to write about, I’m not much of a philosopher.

The image is a face sculpted in sand taken next to the Thames.

Mood: many piles of silly

Things have been hectic and ridiculous recently, but today was proper lovely.  Everyone at work was in a good mood: smiley and chatting about any old bollocks. At one point, me and Jessica were laughing so much by the main gates that a policeman hurried in the garden saying,

‘Now what’s going on? Is that laughter or is somebody crying?’

‘That’s us laughing,’ I explained.

‘That’s alright then, nothing wrong with laughing! Carry on!’ and he left again.

Problems just shrivel up and fall off after a day like that.

I took this photo at work.  We have a tropical butterfly event on at the moment, and I saw this one just sitting on a flower with its tongue out. I think it may have got drunk on the nectar.

And below are some pictures of the butterfly pupae after we stuck them onto canes, ready to go into the puparium to hatch. Some look like leaves in order to hide from predators. Sometimes I find the butterflies can be annoying, smelly and a bit icky; so it’s good to remember that they are also beautiful and fascinating. 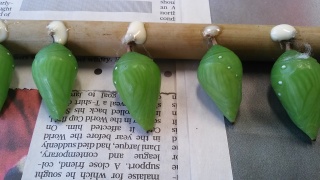 Please tell me about a good thing on your Monday, no matter how small.

Continuing my looking-for-good-things on Mondays…

It’s very easy to get down about getting older, we are told to feel as if life will end when we get old and decrepit, but this week I have been compiling a list to put me in a good mood. My plan for when I’m too old to work and gad about:

Computer games – I’ve played them on occasion, they’re quite fun, but they just seem to eat time and when there are so many things I want to do while I can, I tend to avoid playing. However, once I’m old, and computer games are even more advanced than now, then I’m throwing myself into them with abandon. Fighting zombies in a bombed-out city with a machine gun? Brilliant. Going virtual diving in the sea looking for buried treasure? It’s going to be incredible.

It won’t matter that the world is going to Hell in a hand-basket – well, it probably isn’t doing that any more than it was when I was young, but I’ve spent a life time stressing over global warming and nuclear war and when I’m old that can stop. I’m not saying those things won’t matter to me anymore, but my time of being able to do something to fix them will have passed; it won’t be my world anymore so I’ll stop fretting.

Vanity – I’d say on the whole I don’t worry about how I look. The last time I got a haircut was in 2000 and I haven’t worn make up in years. However, there’s still a small part of me that panics that I’ve got something stuck on my tooth, or that my clothes look scruffy. When I’m old, I’ll look any which way I want and it will be called eccentric, people will excuse my odd appearance with fond, patronising smiles. It will be wonderful. As the poem says, I will wear purple.

Alcohol, drugs and smoking – I used to be a bit over the top with drug-taking and self destructive behaviour when I was younger, in many ways it was great. Then I grew up and became super careful, concerned I might cause myself long-term harm. When I get old enough for long-term not to matter anymore, I will make the most of this. It will be ace, I’ll be a tripping, smoking junkie granny. There may even be some exciting new drugs by then.

These are just a few of the things that no one seems to mention, and there are still all the traditional reasons to be happy – family, going on holiday (if you’re able) and even studying (my mum got her degree when she was seventy). So how about you? What’s going to make your twilight years a joy?

A lot of bad things have been happening in the world recently, and now it’s cold, everyone is miserable and I keep forgetting to notice all the good things that are around me.

So I’m going to make a point of, every Monday, posting something good from the week. Either a photo, an observation, a piece of news or a delightful fact.

So what about you, what has brightened up your Monday? What good things are in your life right now?

If anyone feels like joining in, that would be fantastic, I’m happy to link or feature.

This Monday’s good thing, some photos of the frost where I work… 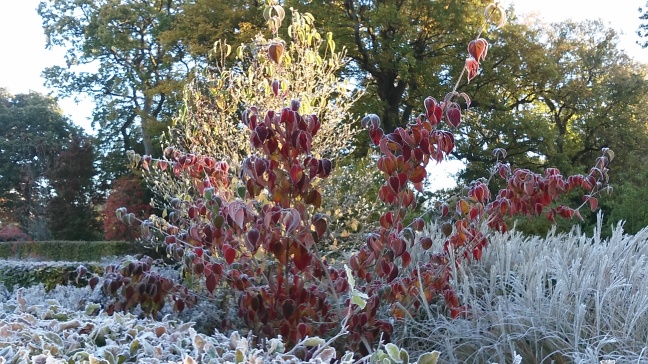 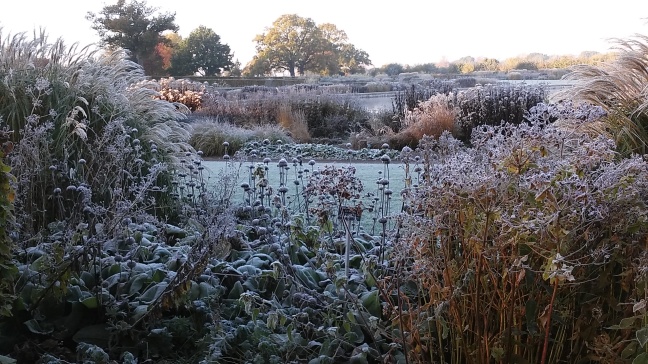