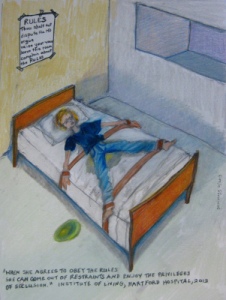 4-point restrained at the Institute of Living 2013 routinely for 19 hours or more.

Let me introduce myself. My name is Pamela S. Wagner, and I was for most of my 65 years a resident of Connecticut. I have a long history diagnosed with serious mental illness and have been on disability for many years because of it. Five years ago,  I was admitted to the Hartford Hospital’s Institute of Living on a 14-day PEC. I would like to tell you about some of the grotesque brutalities that transpired there and the egregious “treatment” that passes for care in that hospital.

Ever since I was discharged from the Institute of Living in February 2013, to which facility I had been committed as an involuntary patient under an order known as a Physicians Emergency Certificate. I have felt too terrified even to read the partial chart which the Connecticut…

2 thoughts on “Institute of Living, Hartford CT, torture and illegal confinement in 2013”