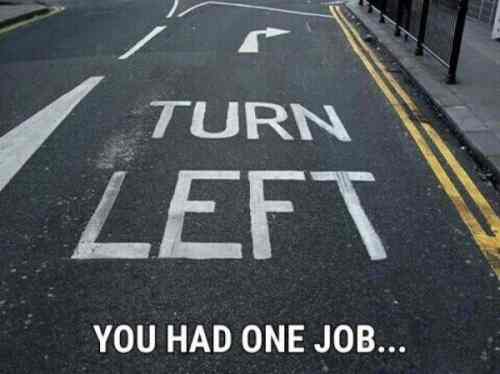 Weather: yep, there was some

Mood: yep, I had some

My title is kind of unfair, since it’s about the contractors my managers got in to lay a path, and it actually looked pretty complicated, but if the meme fits…

Over the last two weeks the builders brought about ten vehicles in, from diggers to tractors to trailers to some kind of Transformer-in-disguise. Today they arrived with a huge truck filled with grit that couldn’t fit through our gates (fascinating to watch them try for twenty minutes though) and a huge bucket on wheels that carried the grit from the huge truck to the path, and a machine that spread it, then one that flattened and rolled it. And there were ten guys who spread it out and tamped it down. The operation took all day, and was hugely impressive. We got to watch an hour of it over lunch, always enjoyable to watch other people working while you eat your sandwiches. Especially if they keep stopping to argue like these guys did. We couldn’t hear what they were saying, but there was pointing and one guy threw his rake down.

On a couple occasions Mateo wandered over to tell them they were doing it all wrong, but he chickened out at the last minute. It was a shame to go back to work, to our more familiar machines.

When we returned to base at the end of the day, we saw the path, beautifully laid, flat, sparkly black. Stretching all the way from the managers’ office through the trees to the other managers’ office. Except for the two-foot-wide gap where there wasn’t enough grit to reach the gate, apparently the huge grit truck wasn’t huge enough.

They were all booked up with other work after today, so we’re not sure if they’re coming back.  We’re told they left in quite a hurry, taking their many vehicles with them.