Found this in one of the gardens. It looked like someone had made a bit of a camp in between some trees and this was left in the middle. I’m not sure what it is, but it moves in an out like a pump and makes a whistly sound sometimes. I thought it might be a bird caller, but much of the time it doesn’t make a bird call noise at all, more like a wheezy gasp. Could it be a wheezy-smoker caller? After all, smokers have become pretty unpopular these days. My colleague Jessica has to walk out of sight of her block of flats to have a cigarette or her neighbours complain. Which is ironic because apparently they’ve had a number of dawn drug raids, but they still consider her to be the troublemaker to be kept at a distance.

Anyway, maybe the wheezy-smoker caller is to round up all the smokers and take them to a safe place far from where anyone else might be breathing. Harsh, I know. I’m glad I have it now and the smokers are safe.

And then, I found this too: 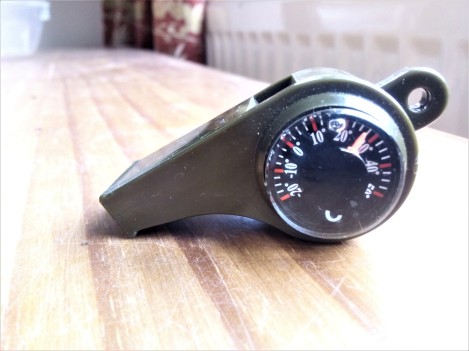 I’m less confused by what this is. I reckon it’s the kind of thing a serious hiker would have. It has a thermometre on one side and a compass on the other. I’m assuming a mountain guide owned it as they led a troop of thrill seekers through the treacherous mountains of London. I only hope our plucky guide still has their machete and crampons. It’s a bleak world out there, but presumably they’ve been trained in the art of finding their way by tube.

Do you think if  I stand in Trafalgar Square tomorrow and blow it I’ll get a group of tourists to guide? And what will come if I blow the whistle and use the wheezy smoker caller at the same time?