Last week the heat turned my brain to porridge and shriveled all the plants to dust. I didn’t post because I was too grumpy.

But now it’s cooler, greyer and my brain got impatient because I haven’t been on a proper adventure into London since lockdown began. So off I went.

I’ve been studying tunnels and catacombs under London recently and came across a place called Leake Street. This is a tunnel going under the platforms of Waterloo station, where graffiti is legal. It sounded like the kind of place I should know about, so I assumed I must have been there and forgotten. I was wrong.

I went today, I’ve never been before and it was ace, but a tiny bit creepy early in the morning.

You could see history in the walls. Layers of images piled up expressing rage, sadness, disgust and joy with life. Lots of current events (of course plenty of covid comment) and delight in colour and shapes.

I found this great blog showing the graffiti on the walls each day as they change – 100 Days of Leake Street.

Next week, more tunnels under London (albeit less colourful ones).

“When you throw everything up in the air anything becomes possible.”
― Salman Rushdie, The Satanic Verses

doki doki (Japanese) the anxiety when someone is doing something nervewracking

ドキドキ (dokidoki) is a word that mimics the sound of a beating heart. It is used to describe physical/emotional excitement or racing of the heart. It can indicate that someone is thrilled, excited, or nervous

How are you all doing? I think I may be getting the hang of this isolation thing, (my biggest problem right now is that a neighbour is playing Amazing Grace extremely loud) but I know many of you aren’t or have serious problems to deal with right now, so please share. Communication is good!

So I’m in London, land of blitz spirit and denial, greed and disaster. Hunkered down in England’s plague-pit, I promise you all, everything is going to be absolutely fine.

Mood: Sort of itchy and news-obsessed. Waiting for doom to knock on the door.

Word of the day: Impest – to infest with plague or pestilence.

“Life changes fast. Life changes in the instant. You sit down to dinner and life as you know it ends.”

It’s been a while since I posted. I just finished writing my book yesterday (woohoo!) I’ve got my head to a somewhat settled place, and a huge disaster is sweeping through everywhere except Botswana and Yemen. The UK government is doing a great job of making a plan up as they go along, London may soon go into lockdown, but I’m still working. Working is actually pretty nice, it feels like we’re a lifetime away from danger when we’re out with the flowers and the robins.

How about all of you? (going to have a look in a minute) Are you isolated? Healthy? Scared or complacent?

Note: for anyone isolating and bored, the above picture was made using the website http://weavesilk.com/ If, like me, you like making beautiful and impressive pictures, but don’t really have any talent or skills, then this is the website for you. Click and drag ineptly as you like and the results will be delightful. The controls in the left hand top corner give you enough variety to keep it interesting. A seriously soothing site.

Today has been a day of rain, paranoia and headaches (I don’t fair well when I’m stuck inside). So this just going to be a hodgepodge of happy pictures, funny things and interesting words. 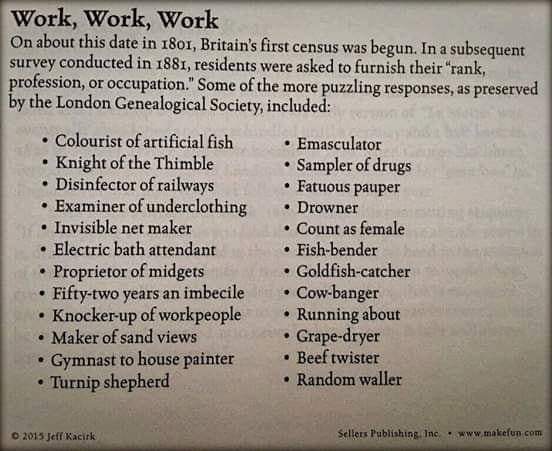 Several words of the day

Chasmophile – lover of nooks and crannies

Alien Resort was asking about the picture I put up yesterday. It was one of the sculptures from the outdoor art Frieze at Regent’s Park (I turned the picture upside down because I liked the way it messed with perspective). Anyway, I thought I’d put up the other pictures from there, since it was an interesting exhibition.

Quite annoying though, despite cordons around most of the art and signs saying Please don’t touch, people were lifting their kids over the ropes and letting them climb all over the art. I like that the public feel less intimidated by art and rules now, but it seems like only the intimidation was stopping us from trashing everything.

^ This is part of the sculpture that I used in yesterday’s photo, there were four of these bridge-like structures with words that didn’t make much sense on them.

I thought this was beautiful, so peaceful ^

^ I’m not usually keen on Tracey Emin’s art, but I thought this captured a feeling well. And I liked the way she was just lying on the grass, as if she’d collapsed there and didn’t want to get up.

^ A rabbit, leaping through the air on the back of four elephants. This looked like the penultimate scene in a kid’s book.

Well, this disturbing hunk of chunk looked like it would step down and start thumping people. Just looked up the artist, and she’s great. May do a blog about some of her art soon, it’s the stuff of creepy dreams.

There were other sculptures too, which I’ll probably post up at some time. I hope you enjoyed these!

I have been robbed of
my filth.”
― Charles Bukowski, Play the Piano Drunk Like a Percussion Instrument Until the Fingers Begin to Bleed a Bit

Word of  the day: Cryptadia – things to be kept hidden 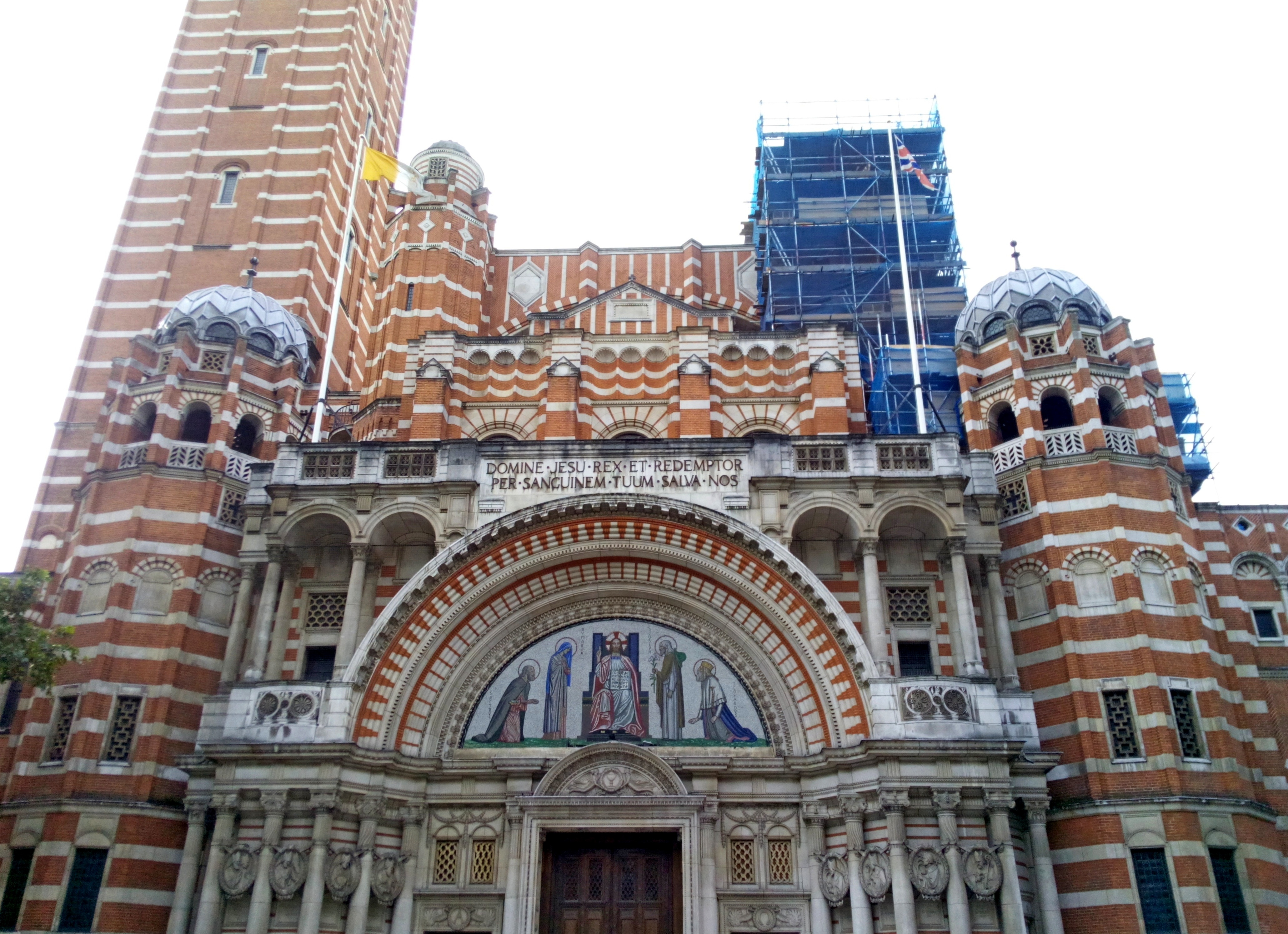 I ended up at Westminster Cathedral. Inside was praying and sermons, outside were small crowds of the homeless. 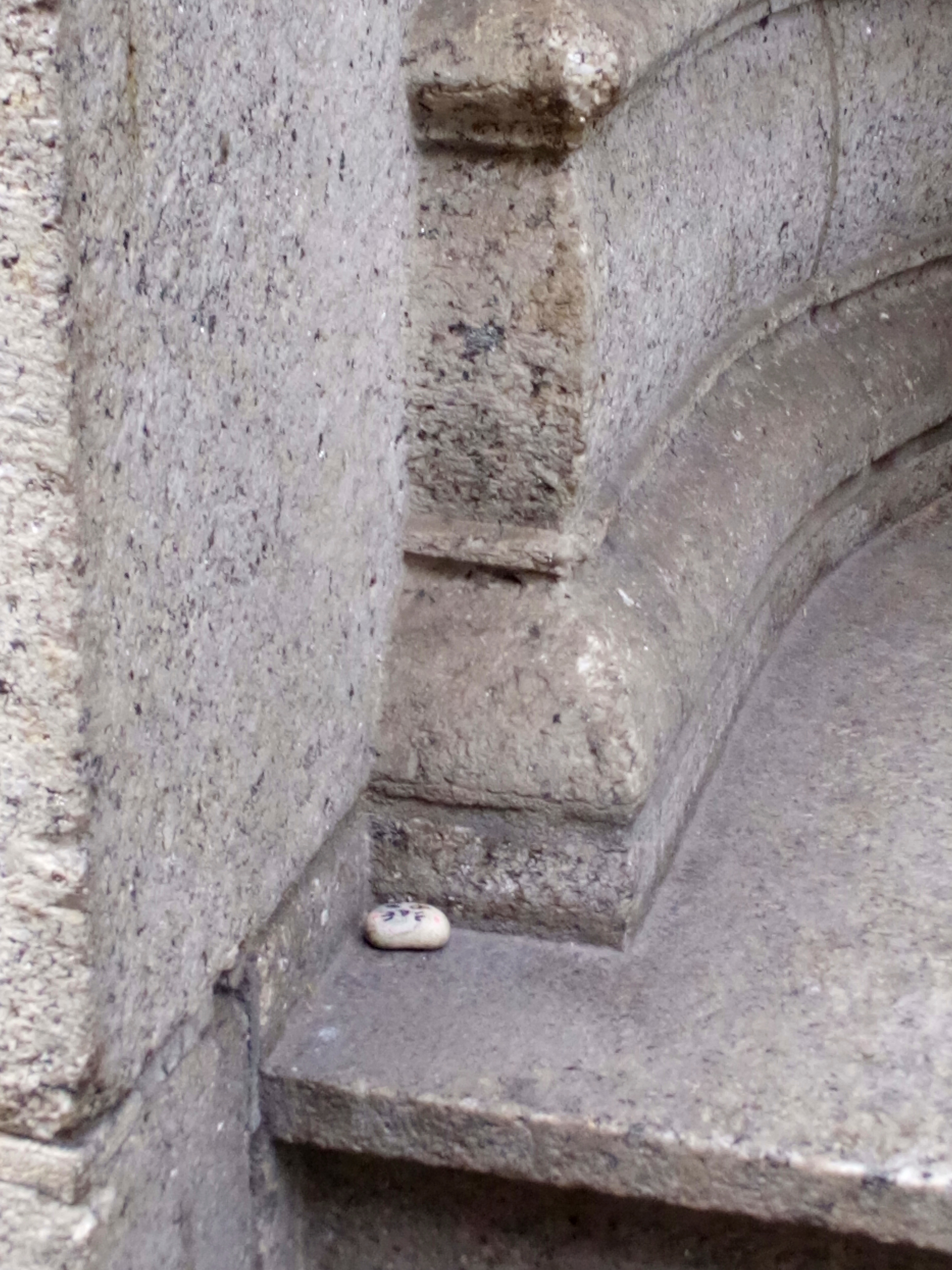 Anyone who’s been following will know that I recently found a stone cat in the gardens at work, and then I made a few of my own. Today I spread them out around the Cathedral, glad it was early before people were about wondering what the fuck I was doing. 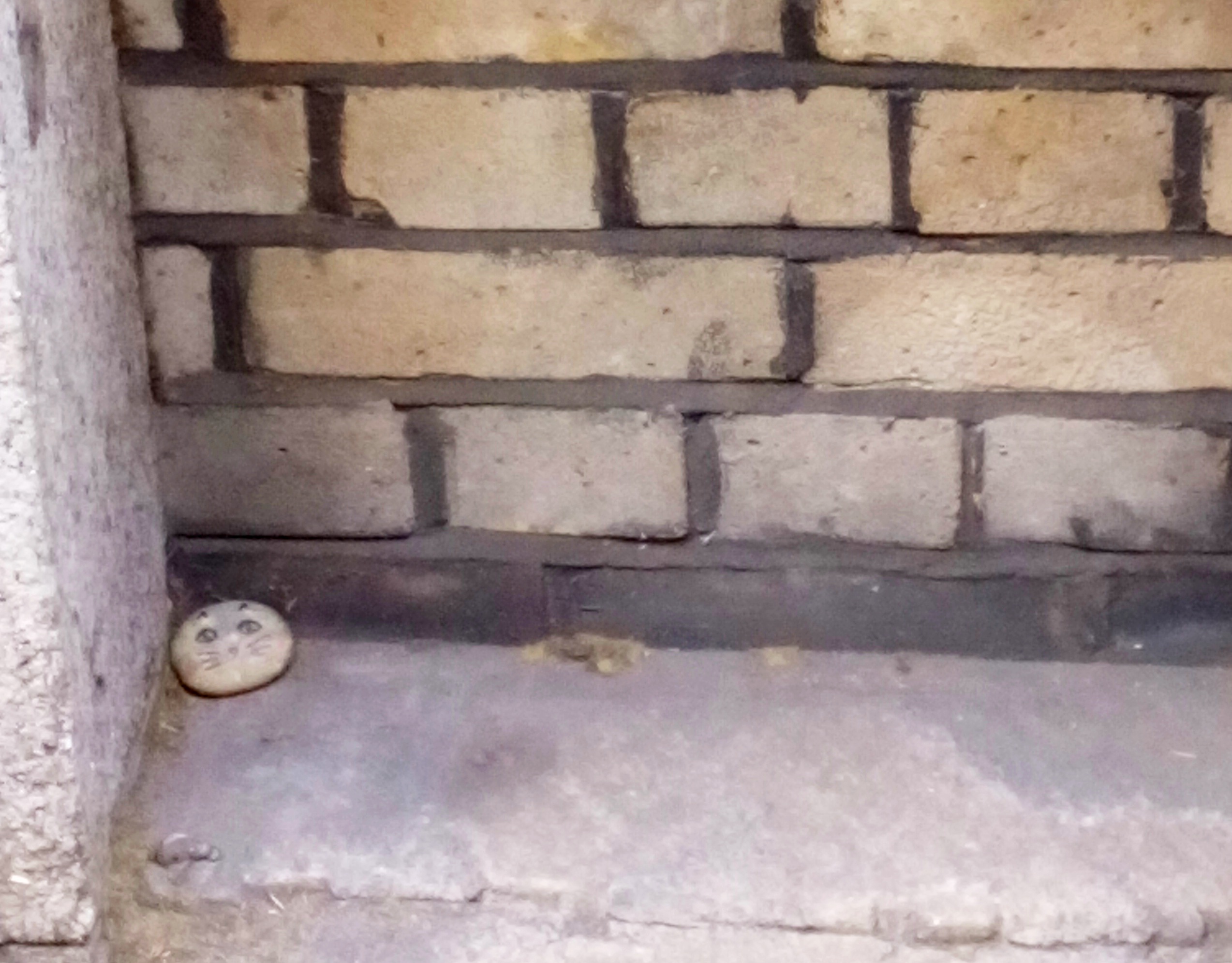 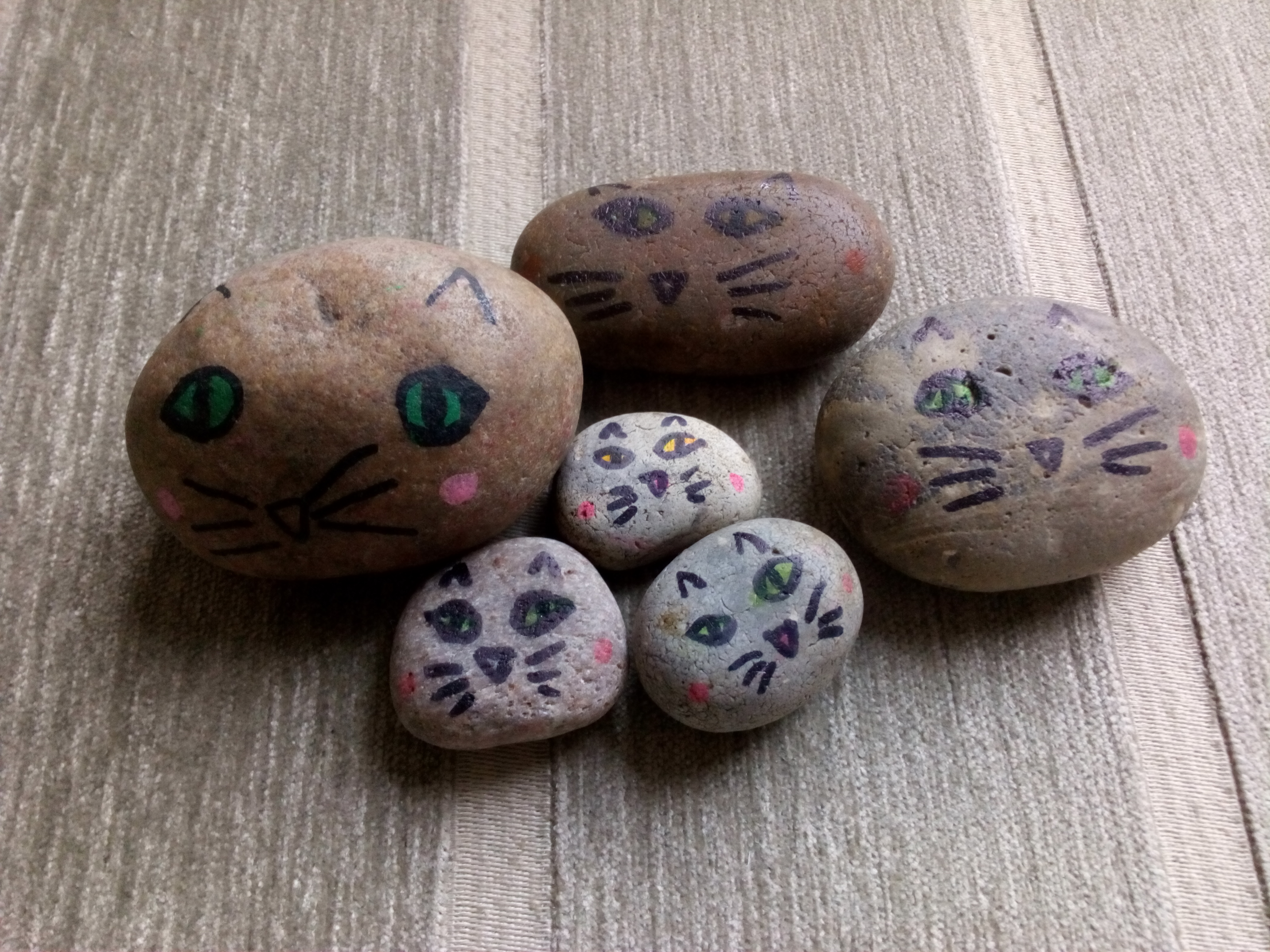 Some of you might remember I found a stone cat in the railing at work with a message on the back to contact Facebook and re-hide the cat. Well, I have now added a few new cats to the collection and I need to work out where to put them.

I’m thinking the story is that original cat has been missing for a week because she’s been playing around with other cats, and now she has a family of cats with her (her own babies? a cat cult? a Top Cat gang?) .

I’ve been trying to work out where to put them. Any ideas? It has to be somewhere secluded enough for me to not be noticed putting them out, but not so secluded no one finds them. Another park railing might be good or under a bush. Although neither is very inspired.

Oh and I found this important letter today, sadly no one was around to return it to, but I feel its message will resonate with younger sisters everywhere.

‘I saw the angel in the marble and carved until I set him free.’

Word of the day: Dealate – insect divested of its wings

One mystery is solved! The encyclopedia of all important knowledge, Calmgrove, knew why buildings in the UK have so many stone babies and small children scattered around them. Here is his brilliant explanation.

‘Fat winged babies: these are called putti, Italian for ‘male children’. They were originally a pagan figure, a representation of Aphrodite’s child Eros, better known to us as Cupid, but substituted for cherubs in Christian iconography. Cherubs themselves derive from Hebrew cherubim, fearsome angelic beings but over time tamed down to podgy infants with ridiculously inadequate wings.
As to the St Paul’s putti, I suspect some of them are a reflection of London’s poor — the orphans, beggars, climbing boys, young pedlars — a reproach to passers-by and an encouragement to engage in some charitable work.’

I love the idea of pudgy infants with only vestigial wings so that they can no longer fly, dodo angels.

The alien space tank on the roof of a building has not been so clearly explained. An air conditioning unit (thank you Boo) and overhead Gantry Crane (thank you Darnell) are two excellent suggestions. I’m not going to spin this into a drama, but all I’m saying is, keep an eye out for inexplicable alien space tanks appearing on top of buildings in your town.

A delightful blog about the artist Keith Haring from canyondreaming, I hope you all enjoy it.

It will be hard not to make this post too personal, but I’ll try.  Keith Haring was an inspiring artist at a time when graffiti was still considered an eyesore and not an art form, a time that I have a lot of nostalgia for. I’m guessing that I might well have run into Keith Haring either on a dance floor (gay clubs were the only ones to play even remotely good dance music in the early 80s, and as Cameo says “we don’t have the time for psychological romance”) or in a mosh pit, and those desperate and proud moments were key formative times for a young suburban kid who wanted to know what all the fuss was about when it came to the energy of the big city and the attitude of contemporary art. That said, I visited Haring’s exhibit (along with Paolo Buggiani‘s work) in Firenze…